This week, Los Angeles City voters passed Charter Amendment C, a dangerous ballot measure that weakens police accountability in our city.1 Though the police union succeeded in passing Amendment C, we are proud to have stood with Black Lives Matter LA, the ACLU of Southern California, and the rest of the #NoOnC coalition to educate and mobilize the Jewish community in support of justice for victims of police violence.

Our coalition mobilized thousands of voters, resulting in 44% of voters casting their ballots to say #NoOnC — a strong showing in the context of the police union’s well-funded and misleading campaign.

We will continue to advocate for stronger police accountability and criminal justice reform in LA — the arc of the moral universe is long, but it bends towards justice. That’s why this June, we’re organizing a special two-part training in organizing skills, anti-oppression analysis, and non-violent direct action.

Sign up here — LA's #JewishResistance Training in June
When: Sundays June 4th and June 18th, 9am-5pm
Where: National Council of Jewish Women (543 N Fairfax Ave, Los Angeles, CA 90036)
What: In the face of bigotry and attacks on democracy, now is a crucial moment for American Jews to strengthen our commitment to build power. At this training, participants will build community, learn core concepts and skills for community organizing, nonviolent direct action, and civil disobedience, and engage with a framework for understanding and fighting racism and internalized antisemitism.

We are building a powerful Jewish resistance here in LA and nationwide, and now is the perfect moment to get involved and fight back. Joining this training is a pathway to leadership. I hope you'll join us.

A Note from Rabbi-in-Residence, Aryeh Cohen

After Passover, Jews enter the Omer, a period of seven weeks that culminates in the holiday of Shavuot. During this time, Jews prepare for revelation: Our rituals and calendar reflect the movement from enslavement to being fully human.

Rabbi Mordechai Yosef Leiner explained the reason for this period between the Exodus and revelation: The monumental event of the revelation happened when it did because that was when the Israelites had successfully gotten Egypt out of themselves.

Egypt was not only the country of their enslavement, but an ideology of structural oppression. It was only when the Israelites were able to overcome the ideological influences of "Egypt" were they able to hear "I am God your God who took you out of the land of Egypt, out of the house of bondage." They were able to hear: "I am God who despises the crass violence of oppression."

We are now preparing for Shavuot. Some of us are anticipating the Torah that will be revealed, but all of us are preparing for the struggles ahead to rid ourselves of our modern Egypt: the Trump Administration's and extremists in Congress' hateful agenda.

I hope you will join Bend the Arc: Southern California as we resist Trump together and grow the #JewishResistance in LA this summer.

While the Trump Administration and extremists in Congress continue push their hateful agenda, we're organizing here in LA to advance progressive change locally. Join us to take strategic action:

Bend the Arc leaders across California are organizing alongside our allies to pass the California Money Bail Reform Act.

Learn more about the urgent need to reform our money bail system on May 30th at an upcoming event organized with our partners, "Fixing Our Broken Money Bail System." RSVP here. 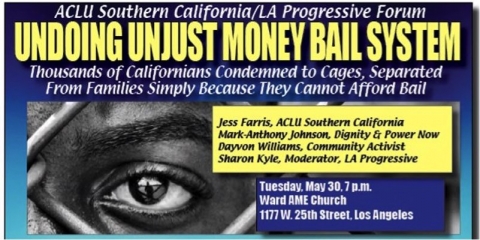 Bend the Arc leaders are gearing up to pass funding for affordable housing in the LA City Council.

Just last month, we sponsored a forum with City Councilmember Gil Cedillo at Temple Beth Israel of Highland Park with LA Voice, the Korean Resource Center, and others to discuss these efforts. 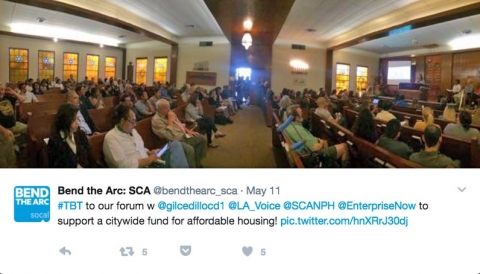 Join our work to fight for more just and affordable housing by emailing Anjuli.

Bend the Arc leaders in Southern California are committed to protesting the dangerous policies that tear apart immigrant families and communities.

This Passover, we spearheaded an interfaith action at ICE headquarters in downtown LA. Over 30 clergy were arrested while blocking the driveway. They were supported by 300 gathered activists drawing from the rituals and traditions of Passover, Easter, and other holidays. We earned significant stories in national and local press. Experience a taste of the action through our short video.

On May 1st, we organized fellow Jews — including IKAR, Caring Across Generations: Faith-based Los Angeles Alliance, PICO Union Project, Leo Baeck Temple, and Temple Israel of Hollywood — for a national day of action in solidarity with immigrants, Muslims, workers, and unions. Our solidarity amplified the demands for justice, and helped build the movement to support communities targeted by the Trump Administration.

The Jeremiah Fellowship: Applications Due May 26

The Jeremiah Fellowship is a unique six-month program for young Jewish leaders. Fellows build strong community with each other, explore the connections between Jewish identity and social justice, learn critical organizing and advocacy skills, and take leadership in Bend the Arc's local campaigns.

The deadline to apply is May 26: learn more, or start an application.