Progressives in Los Angeles have a plan to make housing affordable - and Jewish Angelenos are showing up to help make it happen.

This week, Bend the Arc: Southern California leaders testified at a City Council hearing in support of an affordable housing measure in LA. 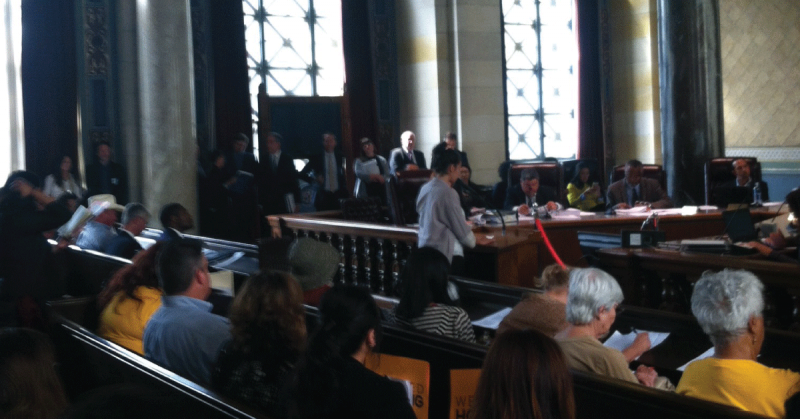 The affordable housing linkage fee is a key piece of a comprehensive platform to make LA housing affordable. If passed, real estate developers who profit from high rents in our city would have to pay into a fund that would build housing units for low-income people who are struggling to get by.

But the battle for affordable housing is far from over.

Mayor Garcetti proposed the linkage fee in October 2015, but it took months of behind-the-scenes lobbying from a coalition of housing advocates, faith groups like Bend the Arc, and community organizations to pressure City Council to move the proposal forward. After Tuesday’s Planning Committee hearing, we’ll keep pressuring the Planning Committee to pass this proposal and advance it to the full City Council for a vote.

How we got here

Bend the Arc’s Advocacy Committee took on housing and homelessness work over a year ago, because we know that LA’s housing crisis is one of our city’s most pressing local economic and racial justice issues. Rents, evictions, and consequently homelessness are rising with low-income neighborhoods and communities of color being disproportionately burdened.

Just this spring, Bend the Arc leaders, alongside our partners, helped pass ballot measures to provide new funding for homeless housing and services (read more here). Now we’ve turned our attention to the linkage fee, as well as other state policies to protect vulnerable tenants and incentivize affordable housing. 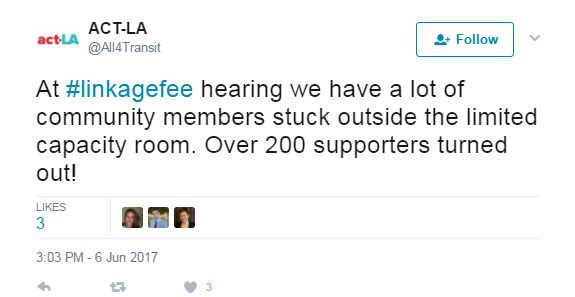 The resistance is local

In the era of Trump, we’re proving that we can still advance progressive change locally. Yesterday, Bend the Arc leaders joined hundreds of community members who packed the room at City Council to make our housing affordable. This is what the resistance looks like — and we’ll continue fighting until our city lives up to our values of compassion and dignity for all.

Now a word from our Advocacy Committee co-chairs:

Woo! Still feeling good, hours later, after seeing so many great speakers from across Los Angeles giving testimony today at the linkage fee hearing at the City Council's Planning Committee, and seeing about a half-dozen of our Bend the Arc peers in the house. Claire and Robin are pictured below speaking to Committee members.

Our opponents from the building and developer lobby groups came out to oppose the fee (which will eat into their profits) bussing in dozens of their contractors to fill the room and hold signs saying "NO LINKAGE FEE." I'd say there were about 40 of them that managed to get in the room. I'll admit, I was really nervous about them being there and controlling the energy in the room. But our coalition showed up: upwards of 150 of our people came out, filled the rest of the room, and packed the hallways outside the hearing clamoring to get in.

And when I say "our people," it was all the people that make LA an amazing city worth fighting for. It was Pastor Sauls from Holman Church in West Adams, it was Mrs. Kim from Koreatown, it was Rosa & Socorro from Boyle Heights, it was Marc from Leo Baeck, it was Rey Fukuda from Little Tokyo, it was Imam Allgood from the mosque on Slauson, it was Pastor Cue from Skid Row, it was Rabbi Robin from Highland Park, it was Ms. Beverly from South LA, it was Sissy Trinh from Chinatown, it was our amazing co-Chair Claire repping Bend the Arc and telling her story. It was a vision for what LA can be if we make our voices heard and make sure there's a place for everyone here. As Robin so eloquently said during her testimony, "let's not let our beautiful city become a privilege of the wealthy."

After all the speakers from both sides said their pieces, Councilmembers asked questions of City Planning Dept staff, and asked that they come back with answers to several of their questions in the next 30 days (or immediately after the July recess). We expected this to be today's outcome. But I definitely heard encouraging signs out of committee members. If I had to hazard a guess on how the fee would fare if they voted on it today, I think it would pass 3-2. I do not think this is the case if we didn't show up in force today--I think it made and will make a huge difference.

There's a ways to go. We've got our work cut out for us on this and the other housing pieces we are working on. But I'm energized and ready to go. How about you?