The decision for Bend the Arc leaders in California was unanimous: Money bail reform is the criminal justice issue we are bringing our collective energy and organizing to now. As Trump advances his destructive national agenda, we're pursuing real justice right here at home with leaders in Southern California, the Bay Area, South Bay, San Luis Obispo and more.

Why money bail reform? In America, only 1 in 10 people can pay their bail - leading to thousands of innocent (mostly poor) people in jail, who risk losing their jobs, custody of their children - even their lives.1

Sandra Bland, found dead in her cell in Texas, and Kalief Browder, who committed suicide in New York, are just two heartbreaking examples of what happens when you can't afford your bail.

As Jews called to do the work of justice, we are teaming up with the Ella Baker Center, ACLU, Essie Justice Group, Youth Justice Coalition, and others to fight for money bail reform in our state, including lobbying our state legislators. And this Friday, we'll find out if the Money Bail Reform Act will move forward in our State Senate and Assembly. 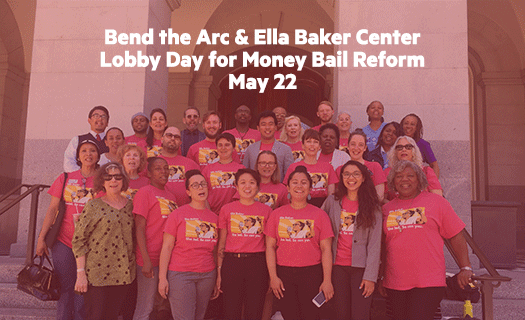 To help you better understand the issue, I'd like to share an op-ed from Erica, a leader in Bend the Arc: Southern California –

Erica explains how Jewish tradition calls on us to challenge the status quo when it is profoundly and profanely unjust, as with the current money bail system. She also explains the really smart solutions in the proposed legislation we can organize to pass this year.

As she concludes, "Bail reform is essential any way you slice it ... It is time to apply our Jewish traditions of questioning and critical analysis to this unnecessary and discriminatory system that has become so pervasive in our society."2

Read and share this Bend the Arc leader's op-ed on the need for a just bail system that doesn't kill the poor.

In the coming months, we'll have additional actions for you to take, but the first step is learning about this critical issue.