After more than two years of organizing, our coalition won a huge victory for housing justice in Los Angeles: a citywide linkage fee to create a permanent funding source for affordable housing. 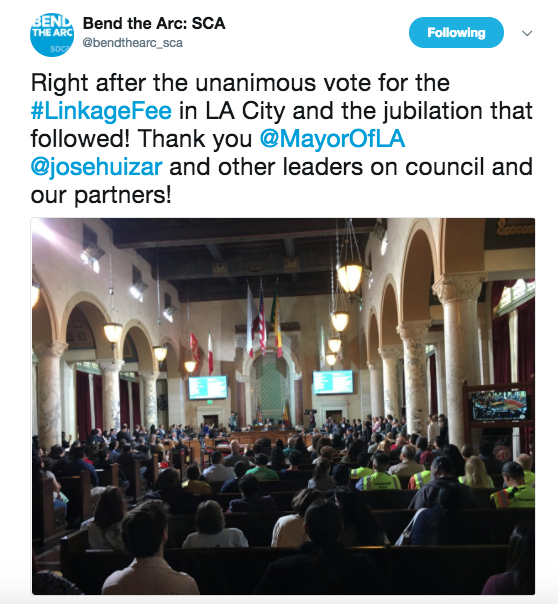 Here’s why Los Angeles needed a linkage fee: Despite over 34,000 people currently experiencing homelessness and a third of renter households paying over half of their income on housing costs, our city lacked a consistent funding source for affordable housing.

The new linkage fee will generate $75 to $92 million annually and create about 10,000 housing units for low-income Angelenos over the next decade.

As a leader of Bend the Arc’s affordable housing campaign team, here’s what I’m celebrating about our efforts:

We worked in deep partnership with a broad coalition

Most importantly, members of the Housing Justice Committee built strong relationships with communities all over Los Angeles. Working together, residents from Koreatown, South LA, Boyle Heights, Thai Town, Chinatown, Venice, Little Tokyo, and the San Fernando Valley stood together to say no to the status quo of rampant displacement, rising rents, and increasing homelessness.

Together we demanded a more just Los Angeles — and our city’s leaders listened.

Over a dozen Bend the Arc members led an effort to lobby key Councilmembers. We helped organize and participated in over two dozen lobby visits with local legislators and gave testimony at public hearings.

The effort took much more than lobby visits, and Coalition for a Just LA members were up to the task. Bend the Arc led a community education event on the linkage fee in March 2017 in partnership with SCANPH, Enterprise, St. Barnabas Senior Services, LA Voice, the Korean Resource Center, and Homeboy Industries. At the event, coalition members educated 100 Highland Park residents about the initiative, including Councilmember Gil Cedillo.

We developed our leadership

As we worked to pass a citywide linkage fee, we also strengthened our advocacy muscles for the fights ahead.

Bend the Arc’s committee leaders trained half a dozen new Bend the Arc members to be citizen lobbyists, developed media kids that the entire coalition used, and submitted op-eds in support of the policy. 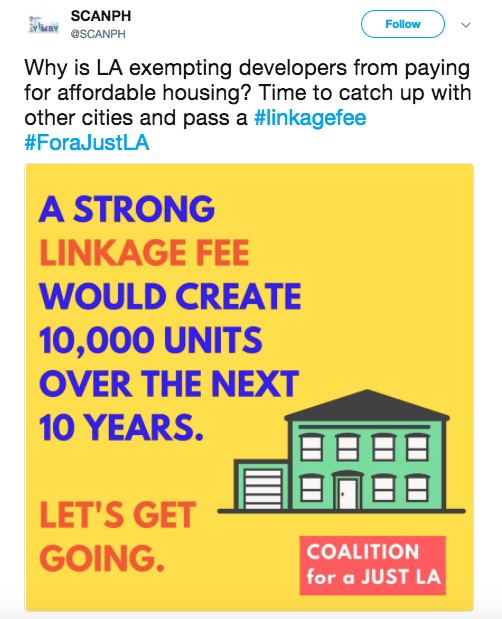 The Housing Justice Committee will continue to bring the Jewish community to the fight for affordable housing in LA because we believe in the vision of a city where everyone can access safety and dignity.

That’s why we’re turning our efforts to a ballot measure to strengthen California’s rent control laws.

I hope you’ll join us on March 26 to learn more at our next Housing Justice Committee meeting — RSVP here!